How to Beat The ‘Boys’ Club’ and Get Business Done 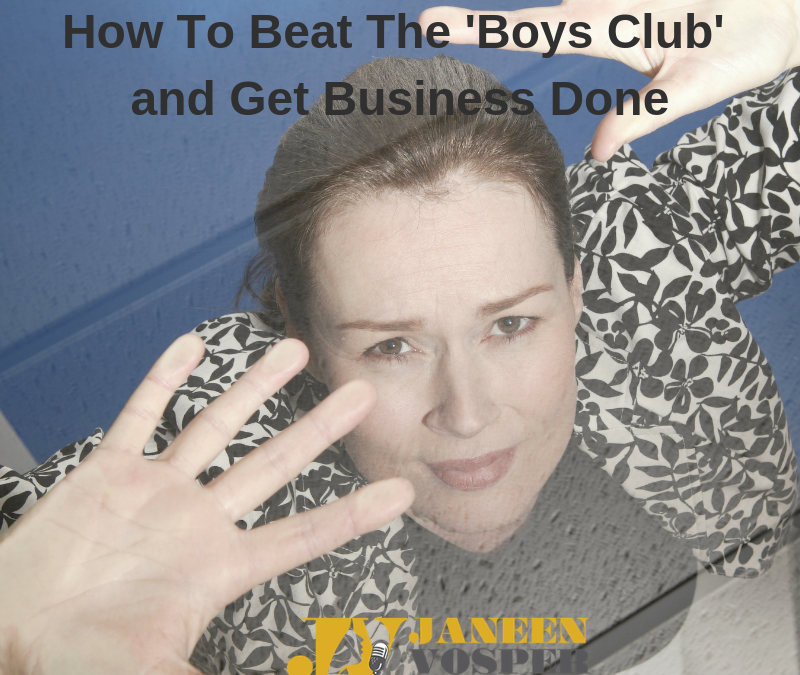 Apparently, the ‘Boys’ Club’ is where the business gets done.

Not very encouraging for a woman who has landed their dream job in a male-dominated company and finding themselves excluded from boys’ club activities.

We still have a fair way to go until the boys’ club thinking is a thing of the past. According to the government’s Workplace Gender Equality Agency, there has been little improvement in increasing the number of women on company boards and with women earning on average just 78% of men’s full-time earnings. It is going to take a big leap in business philosophy to achieve greater equality.

But it isn’t just about income. If you are in a workplace where the boys’ club culture exists there is likely an issue regarding lack of respect and possibly, even bullying.  It is no surprise the boys’ club culture is more prevalent in workplaces where there is a higher percentage of male employees.  Industries such as mining and construction are examples where they are dominated by men and this culture is more prevalent.  You may not like it, but the fact is, boys’ clubs exist.

But, it isn’t all doom and gloom for women in businesses where there is a gender imbalance.  There are techniques you can implement to be recognised and valued.

In my role as a Sales Manager, I spoke with many women who worked in environments where they believed they weren’t respected and often felt out of place.  Regularly experiencing workplace isolation and boys’ club attitudes that she believed prevented her from climbing the ranks. In some instances, they told me they have even had to cope with condescending posturing by men who use terms such as Sweetie, Honey or Girlie.

I heard this many times and although the words aren’t always meant to insult, if used repeatedly they will affect self-confidence.  Undermining your belief in yourself and leading to doubt and a sense of judgement as to your capacity to do the job.

So what can you do personally to improve this situation?

Forming networks with both men and women is very important and finding male mentors or champions is essential.    Women gain emotional support by attending women-only networking events but to progress in your career, you need the backing of both genders.

Seek out allies from your colleagues.  Not all men are going to have the same beliefs and values as every other males in your workplace.  Find confidants who can support, encourage and provide insights into how to deal with specific workplace issues.

You have to speak up.  Chances are you are sitting back while your male colleagues are more outspoken about the work conditions they want and expect.  You can be polite but still confidently state your case.

In the age of political correctness, a very real reason women are excluded is that men often feel they can’t be themselves around women without being reported to HR.  Know when to stay cool and avoid being too easily offended.  If you do, this approach will gain you access to the inner circle.

There is no situation where abuse and sexual harassment is acceptable. Knowing what to accept as customary behaviour and what to find offensive is all part of how to correctly respond to situations in your workplace.

And finally, don’t be that good employee who says yes to every project to demonstrate your value.  We women often believe we have to work harder and place pressure on ourselves to be admired.  Knowing when to put your hand up for projects and when to push back is critical to building respect.

Without a doubt, the overriding influencer in being accepted in any workplace is that you respect and value yourself and what you bring without question.

To work with Janeen, visit her calendar to arrange a Complimentary Clarity Call